How does fixed wireless work?

Fixed wireless networks use microwave technology to transmit data communication through the air.
The basic operation is that the signal travels in a point to point fashion or a point to multipoint. The signal is sent and received by the use of an antenna at each end of the transmission.

Using fixed wireless (microwave) communication requires that the two antennas are able to see each other. This is called Line of Sight (LOS). As a result, the signal travels only in a straight line, and trees and buildings will block the signal. If a building can block the signal, you can imagine that the signal cannot be received or sent inside a building.

Microwave signals can travel using different radio frequencies, kind of like the way FM and AM radios work. If you have never thought about it, AM radio can travel a lot farther from the station tower than FM can. Microwave frequencies are typically licensed by the FCC for high performance transmission (larger amounts of data).

By licensing the frequency, the microwave operator is assured that his signal will not be interfered with, nor interfere with other operators in the area.

Another use for microwave technology is in cell phones. Although our cell phones use different frequencies and are mobile, they are communicating with something called base stations to get and receive their signals. The antennas in our cell phones is obviously very small compared to the antennas on the towers.

You may see microwave antennas on water towers, buildings, cellular towers, or towers made for microwave antennas. Although there are several shapes and sizes, the most widely used is shaped like a dish, pretty much like the satellite TV dishes on homes. 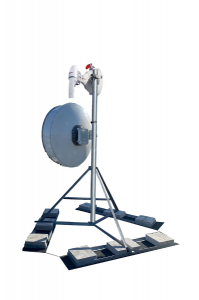 Why are some antennas small and why are some large? The size of the antenna varies depending on the distance and amount of data that can be sent between the locations.

Fixed wireless Internet providers have a network of microwave towers with antennas on them so that they can be less reliant on fiber networks that have cables buried underground. Those cables are at the mercy of machines digging for broken pipes and the like.

All About Fixed Wireless Internet